Been a while since I posted.

To sum up 2015 so far:
But, well....I missed my blog. I started it to write about interesting things I do / make / places I go, and while there's been no dearth in any of those categories, just haven't allowed myself the space to write about it. That's just plain laziness. So let's start with a new beginning....

Gratitude has been on my mind a lot lately. With the burglaries we have a completely busted, inoperable front door and we had $12k worth of "stuff" taken.

Yes, the eejits got my engagement ring, and the engagement ring of Spouse's former fiancee. But they did not get my great-great-grandmother's amethyst and gold bracelet.

They got a week-old-to-us television and a lot of various other electronicals. But I was able to provide a vivid enough description on my stolen (personalized) laptop, that the cops recovered it (on a call for another burglary) + $1100 in other merch that is ours. AND managed to arrest two suspects.

Clear signs the thieves are not MENSA candidates: left the power cords to the television and a wireless bluetooth speaker, which were either attached to the device or right next to it. Derp.

At least one of the thieves managed to cut her/himself on the second kicking in of our front door, leaving spots of blood on our living room carpet. Because of that, the very nice insurance adjuster added carpet replacement in the living and dining rooms (they are contiguous), and paint / painting services to cover the damage to our walls, when the replacement door is installed. We hadn't even thought to include the carpet, let alone paint.

You may see where I'm going with this. For every seemingly crappy thing that occurred, a simple act of generosity, human caring and/or irony, has lightened my spirits in some way.

Yes, we were burgled. Yes, our home was violated and by extension, we feel violated, since our home is our sanctuary.

But.....
My frame of mind, most days, in most moments, is one of just simple gratitude for life, to put it simply. Not every single moment, but for every icky thing that has occurred, I am quick to remind myself that all truly is well overall.

Case in point: I was on the freeway today, in a rush to get somewhere. I entered the highway with a funeral procession in the far left lane, complete with the little flags on the roofs of cars, and flashers on. My occurrence was that everyone, including me, slowed down a little, even though we didn't need to. My lane eventually reached the front of the procession, and in the front were two hearses. Not one, but two. I could see a white coffin in the hearse that was second, and a flag-draped coffin in the lead hearse.

I made note of the company handling the services, and when I got back to the office looked to see if I could find a back-story.

Talk about a perspective moment. Lost stuff seems *really* unimportant in that moment.
Posted by Unknown at 6:11 PM No comments:

Email ThisBlogThis!Share to TwitterShare to FacebookShare to Pinterest
Labels: Gratitude

In short, there's still time for everything to get completely bolloxed. BUT let's focus on the positive, shall we?

Well, hi there. Remember me? #Oops

I'd say I was busy, but my Best Workout Bud detests that word (and I agree - we overuse it). Let's just go with it wasn't you, it was me. I needed some space. And move on.

Holidays were groovy - too damn fast. New Year's was quite delightful, and filled with just a touch of gluttony (no hangover) and time spent with humans (and a canine) I adore. So what to you say to bringing on 2015?

If you follow my Instagram feed (or my personal Facebook page), then you may have already seen and/or requested the recipe for the Crustless Pumpkin Pie I made last week for our office Hallowe'en Party. If not, well, prepare to be impressed with my incredible baking genius. *Uh, not really. I just followed the recipe. Mostly.

We have a number of folks who are gluten-free at my office, and since I was part of the crew to plan said festivities, I thought it might be nice to make sure everyone had yummy grub to eat, so signed up for a gluten-free side and dessert. I made homemade salsa & brought gluten free tortilla chips as the side, then a gluten-free crustless pumpkin pie as the dessert. It was pretty dang scrumptious and really easy to make. I had everything in my house actually, which was a complete bonus. 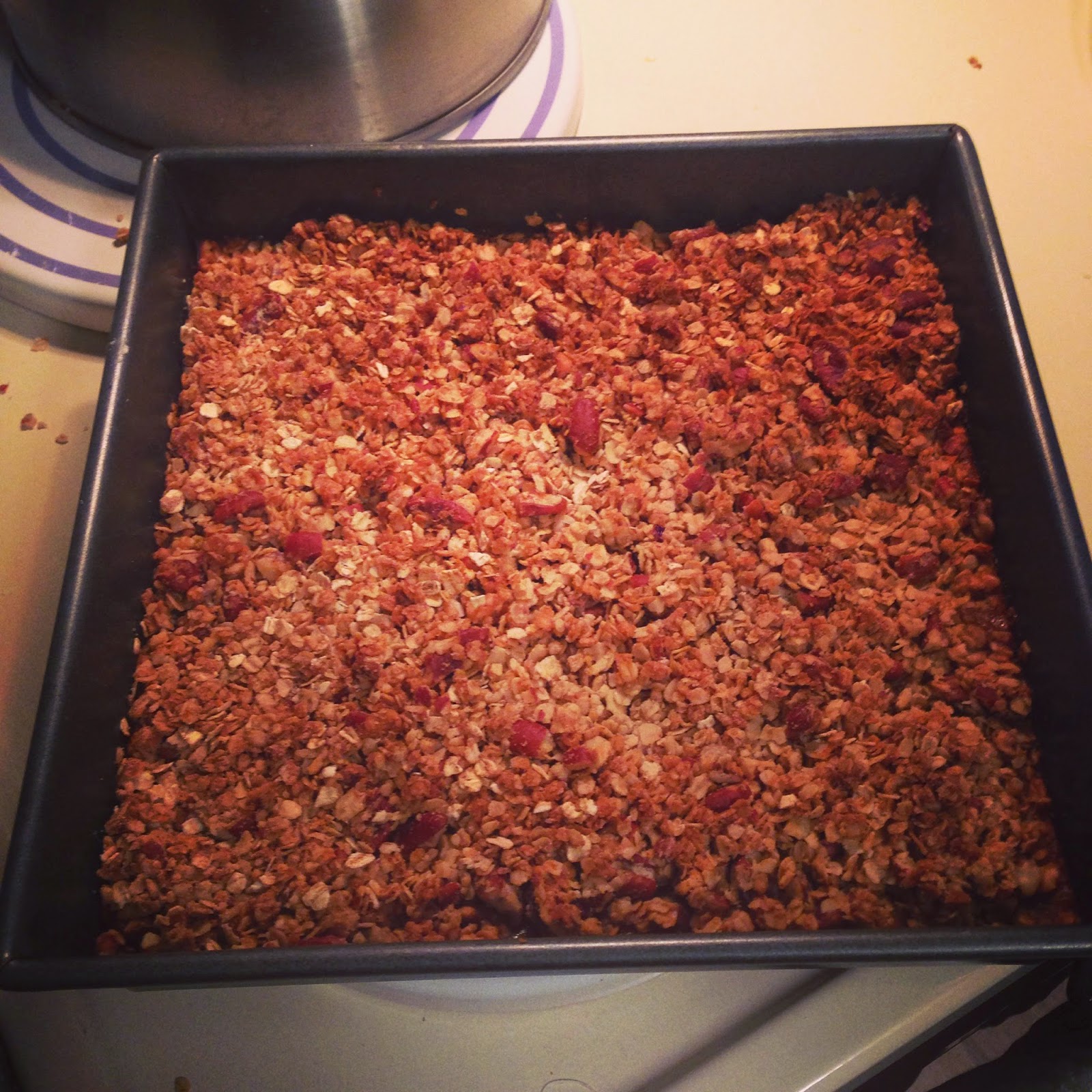 Oh Autumn. You are entrancing.

Autumn. I just love you. Leaves of all colors, crisp air, the return of gourds in all manner of colors, shapes and textures. <sigh>

This past weekend, I made three very Autumn inspired dishes to share with friends, and I'm just going to say it: I am a cooking/baking genius. Ok, not really, but dayum - tasty eats y'all.

We hadn't hung out with our besties in quite a while, due to crazy schedules, so chose to do so Saturday night. It ended up to be a most fortuitous scheduling because Saturday was also the day the brought their new puppy home!!!!!

B&K had a doggie for 15 wonderful years, who we just adored. A pup of surpassing beauty (really, he was gorgeous), character, personality, and joy and his passing, well, it sucked donkey balls. I still think about Tundra, a lot actually, and sometimes still tear up. He was such an amazing fur friend.


Clearly, his passing was way more deeply felt by his mom and dad, and they knew they'd find a new fur friend to hang out with them and started putting toes back into the waters in late summer.

Enter Mesa. She is a shepherd / Norwegian Elk Hound mix and 4-6 months old. Vet can't pinpoint because some ASSHAT dumped her and at least one litter mate in the woods at some point after her birth. What.A.Dick.Move. Anyhoo, she's hit the jackpot this lil pup has. 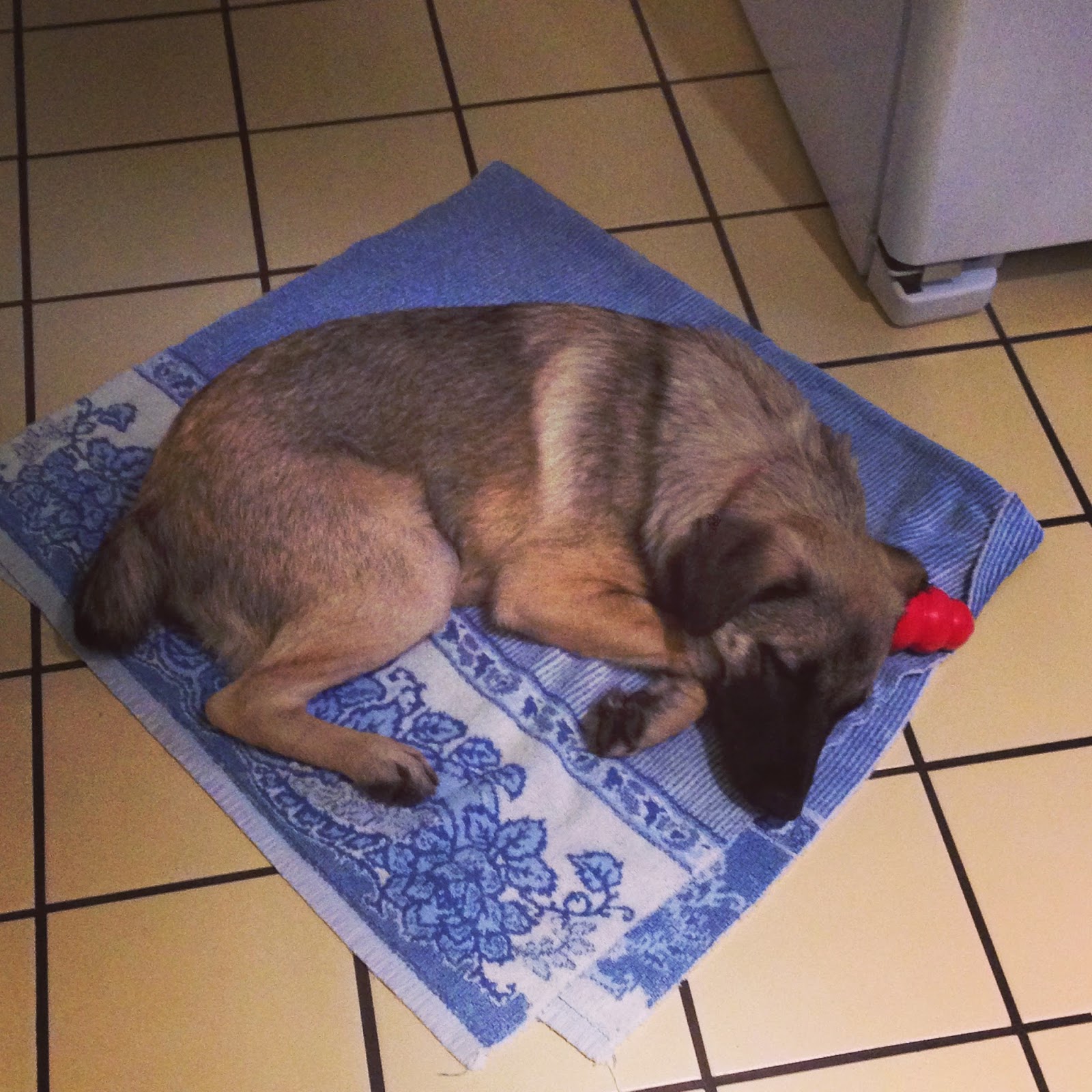 But so have they, because so far, she is calm, snuggly, sweet, and very clever, and she has already brightened up their lives, their home, and their faces, which as their long-time friends, makes me really happy.

Brig & I yakked about menu for dinner, and since I knew they'd be wanting puppy time, offered to bring two things, and they would grill the chicken & steam broccoli. Then came up with an awesome idea for dessert and decided to make it too. (Normally, we get spoiled because they do all the cooking, so I loved doing more!).

I had a pound of locally grown brussel sprouts that I mainly quartered, after removing the harder parts of stems and some of the outer leaves. Tossed them in about 1 T of olive oil, and a sprinkling of salt and pepper. Since Spouse detests brussel sprouts (which means his Brother-From-Another-Mother, Kurt, probably does too), I put the sprouts in a foil packet in case Kurt wanted to throw it on the grill but mainly to cut down on the smell, which Spouse finds so offensive. #Boys

So in this instance, not so much a genius, just a gal with awesome taste in veg.

Spouse found a recipe for Maple Butternut Squash, so decided to give that a whirl. Freaking easy and delicious. I could have added a bit more syrup, to be honest, so I will add a skosh more next time. But SkinnyTaste, thank you for the recipe!!

Third dish, and truly the most deserving of my <self-appointed> baking genius moniker: Apple Graham Crumble.

It was disgustingly easy to make, smelled heavenly baking and wuff. Tasty doesn't begin to describe it. B&K and Spouse had vanilla ice cream on top of theirs; I refrained, but even without the creaminess, it was awesome.

Instructions
1. Preheat oven to 400 degrees.
2. Combine the apples, lemon juice, cinnamon, ground nutmeg and 2 tablespoons of granulated sugar in a 9" x 12" baking dish.
3. In a small bowl, mix the ground graham cracker crumbs (or flour), brown sugar, and butter with the tines of a fork, until small, even sized crumbles form.
4. Sprinkle the crumble mixture evenly on top of the apples.
5. Bake uncovered for 15-20 minutes, until the apples are tender and the topping is golden brown.
6. Let sit for 10-15 minutes, if you can stand it.
7. Serve with vanilla ice cream, or ice cream of your favorite Autumnal choice.

Jen's Hacks
- I used demerara sugar with the apples
- I didn't actually measure the graham cracker amount - just ground up one whole packet but seemed to work well. Used 7/8 of it all.
- I added 1/4 teaspoon of ginger powder to the apple spices as well. 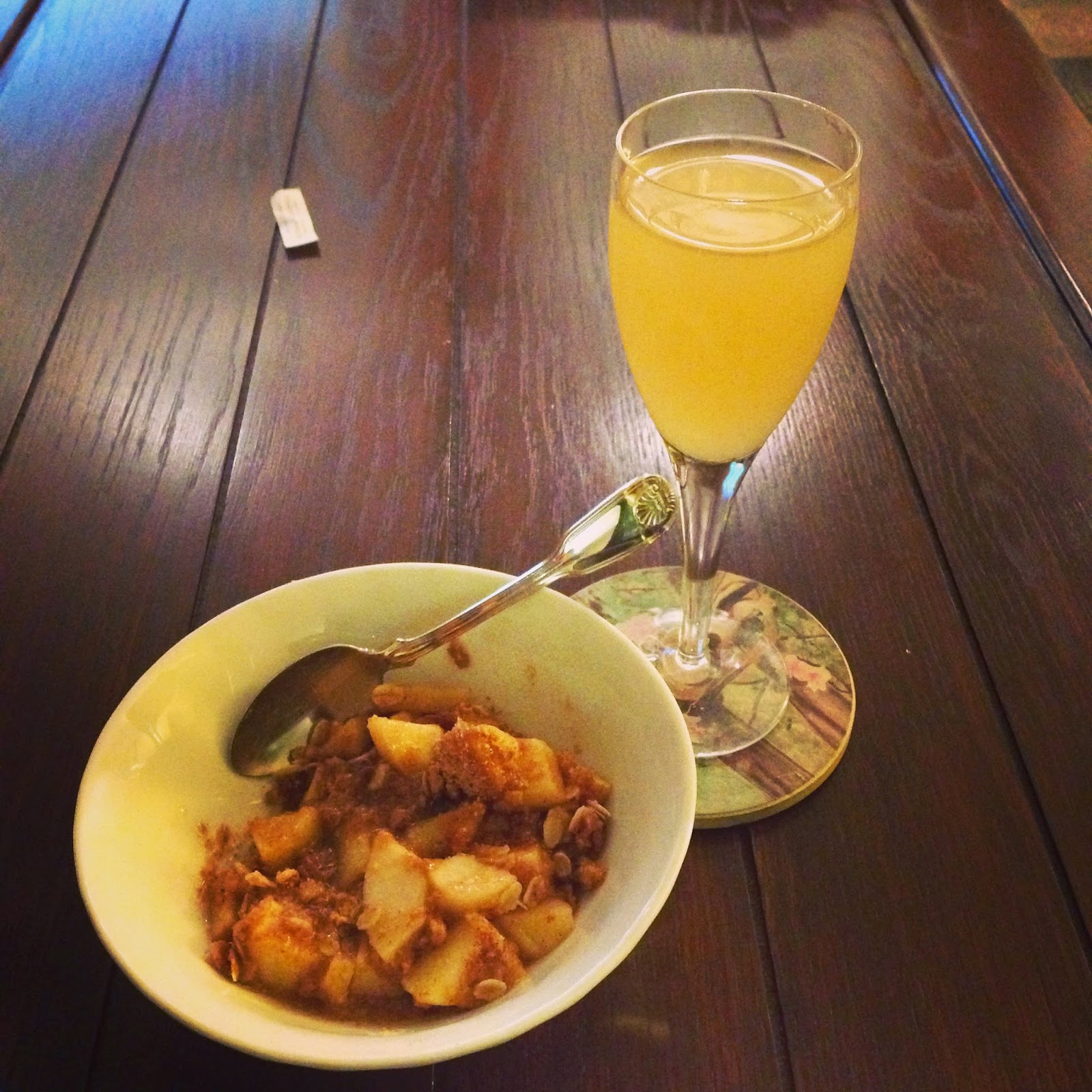 Since I was going to put it together at B&K's house, I made the dish like this:
- Cored and chopped the apples and tossed the small pieces in the lemon juice, then put them in a large container to keep in the frig until ready to assemble.
- Mixed the cinnamon, ground nutmeg, ginger powder and demerara sugar together and put into a clean, dry spice jar for traveling.
- Ground up the graham crackers until fine, and added the brown sugar, then put the topping into a baggie to take with me.
- Took the 1/2 cup of butter and just made small dollops, which I put on top of the crumb mixture instead of working it into the crumbs & sugar mix. Seemed to be just fine.
- Brig suggested adding a sprinkle of quick oats on the top too, so we did that. Added a great texture and flavor!

Assembling was super easy from there and way better to make fresh.

I thought of a couple of things I'd try next times, like maybe add in some real vanilla extract/bean paste or drizzle maple syrup over it next time. Or honey. I mean, there's a ton of interesting things one could do. Add nuts. Dried fruit. My tummy just growled.

The thing I love about cooking and baking is, if you are willing to expend the time and ingredients, the most amazing dishes are usually the ones where you just grab stuff and make a dish out of it.

Have you had a recent cooking or baking adventure?
How'd it turn out?